By now, it is cliche to say that the internet has fundamentally changed how we consume, process, and publish content, yet, at the same time, it cannot be overstated enough. There are countless business and technology leaders, such as Apple founder, Steve Jobs, and Twitter founder, Biz Stone, who constantly preach and muse about all of the information that is now ubiquitously at our fingertips. They love to gloat about how their own products and services will give go even more opportunities to access an even greater amount of this vast universe of information. Google founders Sergey Brin and Larry Page, most succinctly summed up this prevalent, virtuous attitude with their now famous quote:

With all of this mutual, congratulatory grandstanding, people rarely stop to consider how such easy access to information channels (both from a consumption and production standpoint) would affect basic uses of information such as the understanding or interpretation of truth and authenticity on the web.

Clay Shirky, in his book, Here Comes Everybody, discusses the limitations of the human brain, using email as one example, where he explains that people have already hit practical ceilings in their ability to effectively filter, process and respond to incoming information. At this critical point of “information overload,” a person is faced with a dilemma. How do I prioritize this information and choose what to read first, what to save for later, and what to discard without reading at all? Unarmed and unprepared, many people do not know how to respond to such an avalanche of information, so it is possible that they fall back on primal thinking patterns that do not necessarily include techniques such as critical thinking. I hypothesize that this in turn leads to an exaggerated attraction toward identity-based processing where people tend to only internalize information that fits harmoniously with their values, beliefs, and social memberships. All information that doesn’t fit into this privileged bucket bounces off their “identity shield” and never gets analyzed.

George Lakoff speaks extensively about this phenomenon in terms of American voters and political strategy in his articles and books such as The Political Mind: Why You Can’t Understand 20th Century Politics With an 18th Century Brain. In fact, sophisticated political and marketing strategies are frequently based on a psychological understanding that powerful symbolism is much more important in influencing the masses than actual facts. As Michael Shermer, founder of Skeptic Magazine, puts it:

“People believe weird things because our brains are wired up to find meaningful patterns.”

Therefore, the goal is to simply evoke an emotional response and generate trust through identity associations. Once that bond is created, cognitive dissonance sets in and people tend to rationalize or simply ignore the pieces of the puzzle that no longer fit, for example when “their candidate” takes a stance that contradicts their belief system.

Another artifact of the internet’s emergence is that it very well may be changing the way we read and think. Nicholas Carr discusses this idea in depth in an article he wrote for Atlantic Magazine, called “Is Google Making Us Stupid?”. He proposes that our use of the internet is making sustained and focused reading of books or even long articles increasingly difficult. Our reading behavior has completely changed in that we now all act as amateur speed readers, skimming and bouncing from one title, headline, or abstract to the next. To emphasize his point, he cites a study of online research behavior from the University College London which found that readers often “power browse,” primarily looking for “quick wins.” In fact, in light of how prevalent this consumer behavior has become, entire websites and business models have emerged, such as Newser, Digg, and Twitter, that encourage and leverage these new habits by keeping users primarily focused on professionally crafted or user-based summaries of longer articles. In addition, their interfaces entice users to jump from one article or topic to the next as quickly as possible. For example, Newser, with its slogan, “Read less, know more” has an image-based grid of all the latest and/or most popular news stories. It is sort of a more extreme, interactive web caricature of CNN’s Situation Room, in which multiple monitors simultaneously display entirely different stories. 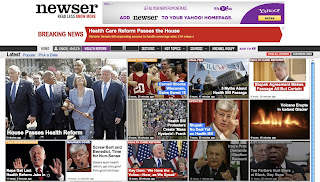 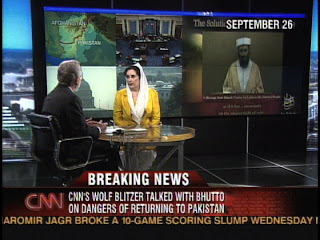 Amateur Night at the Internet Cafe

So what is the big deal about all of this information overload and superficial reading behavior in terms of “truth”? To find the answer to this, we need to go back to Clay Shirky and a phenomenon he popularized called “mass amateurization”. The internet has catalyzed, or more accurately enabled, a dramatic communication shift around the globe in which the traditional one-to-many model (e.g. newspapers, television and radio networks) is rapidly being replaced by a many-to-many model. Shirky is one of the first technologists to consider the implications of this shift. He reminds us that having a greater quantity and diversity of information available to us is not inherently better or worse. Rather, he quotes the physicist Philip Anderson, and proclaims that often “more is different.” It is fundamentally different!

When we couple mass amateurization of content with cursory, superficial reading (breadth rather than depth) and identity-based filtering, what we ultimately end up with is a lot of published content on the web that is either full of half-truths or misinterpreted facts that have been propagated and sloppily reproduced through many iterations. Consider this to be the modern version of the “telephone game.” One Snopes article illustrated how this works in a response to an email going around listing supposed comments by sports announcers that involved double entendres. Suspiciously, these statements were all attributed to anonymous sources. In the analysis, they pointed out one of the double entendres in a commentator quote about Andy Roddick, a pro tennis player, being superstitious and having his wife “kiss his balls” before a match. They showed how this double entendre may have been creatively borrowed by the email author from a joke that Johnny Carson had once told when speaking to Arnold Palmer, a pro golfer. This same pattern shows up again and again. Another article on Snopes discusses an alleged nude photo of Sarah Palin that was being spread around which was actually the same picture that someone claimed years before was a nude snapshot of Julia Louise Dryfus. Both stories have since been deemed false as the photo ultimately was proved to be a photoshopped fake.

Comedy and satire surprisingly even becomes a confounding issue within this new ecosystem. As SNL, Daily Show, Colbert Report, and Onion News sketches are quoted around the web, they often are intentionally or, more likely, unintentionally mixed in with quotes from the real-life counterparts who are being parodied. During a rapid skimming exercise across multiple websites, someone may quickly cut and paste a satirized quote and use it to support their claims in a serious argument. Once again, this happened with Sarah Palin, when some people mistakenly attributed several of Tina Fey’s SNL quotes to the actual Sarah Palin. It may be increasingly common that the sarcasm and satire get lost in the translation (via web syndication) and Stephen Colbert’s “truthiness” ends up being presented as actual “truth”.

It is quite possible that the new age of web-inspired “power browsing” makes people more susceptible to blatant, thinly-disguised propaganda. The attention span of many web readers may be too short and divided to pick up even the most obvious red flags, let alone the more nuanced details that hide behind the headlines (e.g. “The $600 Hammer”).

Legends have been around since the dawn of mankind and have served a number of constructive social purposes. Tall tales of heroics by various public figures are also nothing new in our society, such as when George Bush was falsely credited with paying for the funeral of a boy who drowned near his Crawford Ranch home. The difference now is that these legends are mixed into the same digital pot (in the form of mass emails, forum posts, and blogs) with real news stories. This makes it ever more tedious for the casual information consumer to sort out fiction from fact, especially when such legends are deliberately incorporated for the purpose of political persuasion. The problem compounds each time these stories are edited, embellished, and re-syndicated by another “creative” user. It all gets mixed, stirred, and bundled up together before being shipped off again to the next naive and mentally overwhelmed recipient. The “telephone game” continues. When trying to phish out the truth with incredibly complex issues such as the banking crisis or health care reform, it is no wonder that all the factors discussed above leave citizens in such a state of helplessness and confusion.

This may explain why people start to gravitate toward overly-simplistic “theories of everything” (as coined in the “Baloney Detection Kit” video). If a provocative personality such as Glenn Beck or Alex Jones, can neatly package up all of our problems in this country and attribute them to absurd constructs such as “Obama’s Socialist Fascist Regime” or a small global network of perfectly unified elites called the “New World Order”, it makes it much easier for their listeners to symbolically accept. While some of these conspiratorial, black-and-white world visions are quite terrifying, they are oddly easier pills to swallow than the uncertain and complex, grey truths that likely exist below the surface. I believe that Michael Sherner said it best. When attempting to determine the authenticity of information:

“The point here is, you want to have a mind open enough to accept radical new ideas but not so open that your brains fall out.” 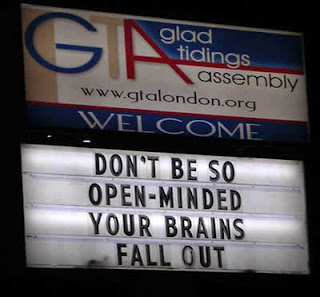